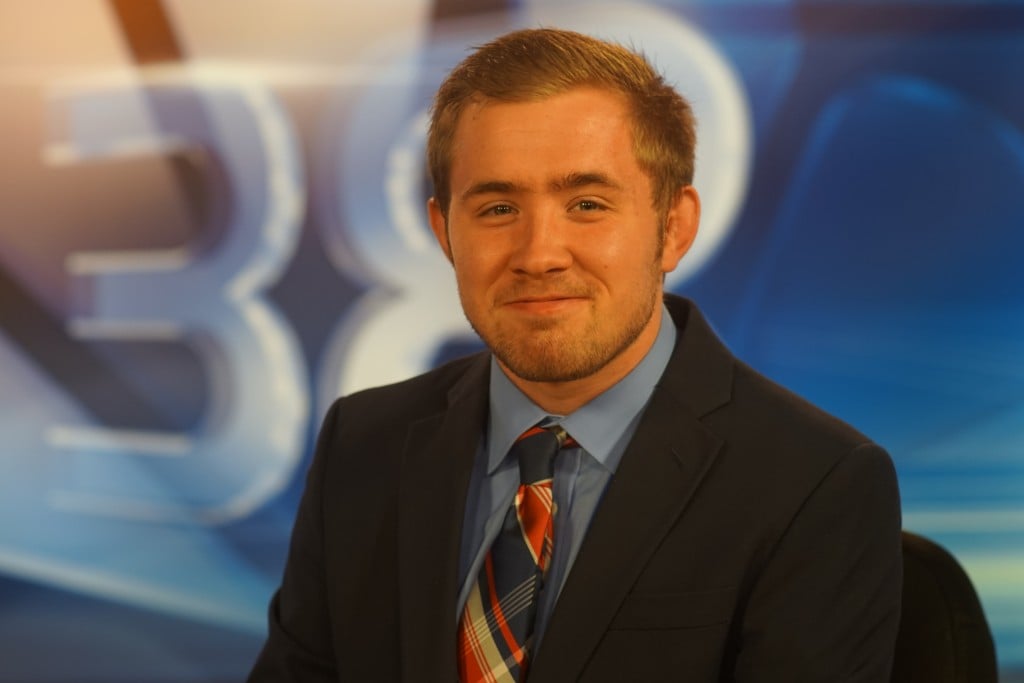 Tyler Redmond grew up right here in Columbus. His love for his family, and this community, are the biggest reasons he decided to stay here for college.

Tyler got his start at WLTZ after appearing on the Dee Armstrong Show as a guest. Since then, he has branched out into all aspects of the station. He is a Production Assistant, Videographer, Director, and is growing into a Sports-Reporter.

Tyler spends many Friday nights under the lights of High-School Football, as well as a few Saturdays in Athens, Auburn, or Atlanta. One of his favorite things to do at WLTZ is shoot sports.

His passion is Major League Baseball. On his own time, he interviews current stars as well as Legends of the game. He has aspirations of working with a Major League club in the future.

Though he is driven, he is also very grounded in his faith. He has been a member at Hilton Terrace Baptist Church as long as he can remember.

Tyler is proud to be a member of the WLTZ team.

WLTZ NBC 38 is pleased to be able to provide some of the market’s top-rated local newscasts from WTVM News Leader 9 for our audiences starting November 23rd. We continue to explore ways to enhance our offerings and expect more…

Kate Scrivner, a local artist, spoke with Tyler Redmond to discuss how she came up with the idea of painting to raise money for Safehouse Ministries. Safehouse is a local shelter for those that have struggled with addiction, homelessness, and…

Coronavirus has affected us all in one way or another. But, now it hits close to the Auburn community. Coach Pat Dye, longtime head coach of Auburn Football, tested positive for Coronavirus earlier this week. Though he is asymptomatic, he…

After years at WLTZ, we are proud to recognize Josh Pate for his new endeavor. Josh has spent the past few years broadcasting through his popular Youtube Channel, 'The Late Kick,' and…

Chambers Academy student, Peyton Lamb, has suffered from Cystic Fibrosis her entire life. Cystic Fibrosis is a disease that affects one's ability to breathe as time goes on. Peyton has had 26…

March 3rd, 2019 was a day that none of us will ever forget. With so many lives lost and so much left to rebuild, the WLTZ Staff wants the people of Beauregard, Smiths Station, and other surrounding areas that are…

Back in October, Brandon Tucker broke the Guinness World Record for Pull-Ups in a 24-hour period. If you're wondering how many he did, 7,715. Needless to say, it was…

Savannah Schoenherr got her start at Gymnastics Unlimited here in Columbus at the age of 4. Since then, she has achieved high-school state championships, All-Americans, and even a full scholarship to the University of Florida. She took the time, while…

Pat Sullivan needs no introduction to the Auburn Family. He was the first Heisman trophy winner for the Tigers, and a Quarterback coach later in his life. He passed away on Sunday,…

Jacob Burgess has been drawing since he was a kid. But, for the past year, he has made a living as an artist. And his work is truly impressive. Sports-Figures are by far his most popular request, he has drawn…

Baseball season is still a few months away, but that did not stop Columbus State's Baseball Team from taking the time to visit Fort Benning this past Saturday, just in time for Veteran's…

In overtime, both teams were tied at 3. And it would be Jay Croop who not only got the winning shot, but also kept the Dragons in the game with an earlier shot in overtime as well. [field59_video account="WLTZ" key="4231dccff6b1ab026af1737c5dfcb455de167b45"…

Alternative Baseball is an organization that is so similar to the real game, you may not know the difference. More important than the game, it gives kids that suffer with mild autism a chance to be a part of a…

Who Wore it Best? Halloween Edition

BRANDON TUCKER IS THE NEW RECORD HOLDER, AND HE'S FROM THE FORT BENNING COMMUNITY. FOR EVERY PULL-UP HE DID, MONEY WAS DONATED TO LOCAL CHARITIES AND NON-PROFIT ORGANIZATIONS, SUCH AS RESCUE 22, WARRIOR FORTITUDE, DARBY'S WARRIOR SUPPORT, WARRIOR OUTREACH, ACHILLES…

Taquon Marshall Interview - 'The Inside Scoop'

Prayer in schools is a topic that has been debated over for years. But this school year, it has hit close to home. Opelika high school prays before every home game, but that changed…

First Ever, 'Aubie the Tiger,' Speaks Out

Tyler Redmond speaks with Meteorologists Miller Robson and Dana Barker about the March 3rd tornadoes that hit many of the surrounding communities, as well as the rebuild efforts.

Charlie Ward visits Columbus, and gives his testimony to local high school, 'Fellowship of Christian Athletes,' students. Charlie's message to the students was to live your life in a way that represents…

Second Story has been a staple for college students in the Uptown Columbus area for three years now. Last year, the first 'Easter on Broad,' took place downtown and it was…

Ms. Erris Croome just celebrated her 108th birthday party. When asked what the secret is to living a long life she stated that, "I don't think there is a secret, just keep living!" Ms. Erris' also gave her advice to…

Detroit Tigers' Tribute to Fort Benning Tyler Redmond Willie Horton is not just a former Major League Baseball player, he is a Detroit legend. A 4-time All-Star, he uses his platform to support…

Biden: Will Likely Send Out Millions Of Masks Soon