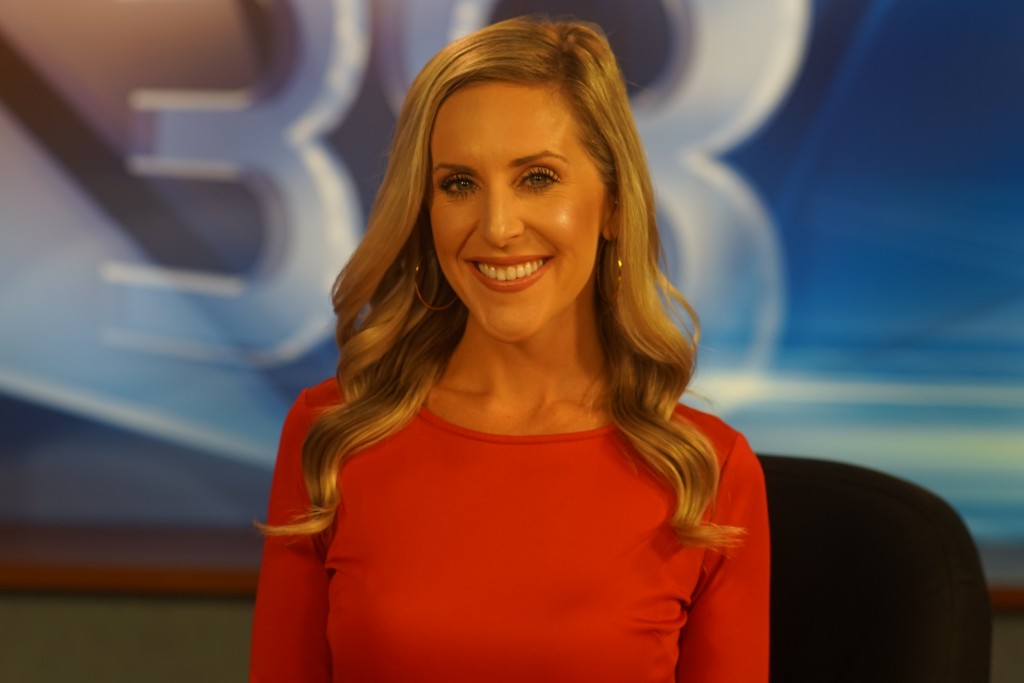 Mumma was born and raised in Orange County, California. She attended the University of Arizona (Go Wildcats!) where she studied Journalism and minored in Political Science and Psychology.

During her internships there, Marlena covered big stories all along the Mexico Border, the Tucson shooting involving Congressman Gabby Giffords, and Occupy Tucson.

Marlena then headed across the country and started her career at WBKB in a small town in Northern Michigan – Alpena. There, she did everything from reporting to anchoring and even weather on the weekends.

Warm weather called Marlena to her next job in the Lone Star State. She reported and anchored weekend newscasts for KETK in Tyler, TX and WVLA in Baton Rouge, LA. During her time there, she covered an array of stories from the Kaufman County Murders, featured on Dateline NBC, to the controversy surrouding the Church of Wells, and Catherine Grove. She also interviewed Texas Senator Ted Cruz, U.S. Senator John Cornyn and Texas Governor Greg Abbott, among many others.

After two years in East Texas, Marlena headed to Central Texas to report for KWTX in Waco. She was soon promoted to the 3 p.m. anchor spot. She produced and hosted many different guests from bands, to cooks, to fashion designers and pet adoption centers (where she adopted her 85 pound Aussie/Lab Mix, Bradley). Marlena’s effort saw that broadcast grow from #3 spot to the #1 spot.

Marlena met and fell in love with a solider and married him in May 2016. He is taking the Captain’s Career Course at Fort Benning and that’s what brought Marlena to WLTZ. Marlena and her husband are excited to live in East Alabama.

If you have a story idea for Marlena, email her at mumma@wltz.com.

It's time for our pet of the week! This sweet girl has been in the shelter for a year and is need of a loving home. Meet Mellie! She'll fit into any…

According to the CDC, in the last 20 years, the number of adults diagnosed with Diabetes has more than doubled. 34.2 million adults suffer with Diabetes. It is the 7th leading cause of…

This Veterans Day, Give Back To Those Who Served At Your Local VA

In reflection of Veterans Day, the U.S. Department of Veterans Affairs (VA) is asking Americans across the country to consider working at VA as a way to honor and care for our nation’s Veterans.…

From 3D printing of PPE to creating RideShare programs for veterans, VA is Mobilizing Innovation Resources to Fight COVID-19

As the nation continues to deal with COVID-19, the U.S. Department of Veterans Affairs is creating and implementing new innovations to serve our Veterans, and to help them receive care during the pandemic. Through…

Build a Gingerbread House To Complete The RiverCenter for the Performing Arts Village!

The RiverCenter for the Performing Arts ask the community to participate in building a gingerbread house for their village! Staff at the Rivercenter felt it was important to continue to offer this popular…

Have Zombie Pig Take Care of Your Thanksgiving Dinner!

Enjoy time with family and friends and let Zombie Pig take care of the Thanksgiving Feast for you! A full package comes with smoked turkey, sweet…

Calvary Tabernacle Church in Smiths Station will be hosting a Fall festival Saturday, Nov. 7 with a chili cook-off, a cake walk and so much more! Everyone is invited to this free, family…

Dining for Charities Program Donates $3,251 to Feeding the Valley

“Out of the Box: A Juried Outdoor Sculpture Exhibition”

Large, curious structures of stone, concrete and steel have appeared on the grounds of the Jule Collins Smith Museum of Fine Art at Auburn…

The Columbus Police Department is holding a major outdoor hiring event at the Goodwill Community Campus. Job seekers who attend the event can look forward to onsite interactions with many divisions of the Columbus Police…

With long lines at the polls and extra safety precautions in place, Americans are being urged by public leaders on both sides of the aisle to make a plan to vote. The Boy…

Bringing You to Ireland-The Birthplace of Halloween

Can't travel this year? No problem, because we're bringing you to Ireland-the Birthplace of Halloween-just in time for the spooky season! When the Irish emigrated to North America in the 1800s, they brought…

Lots going on over at Paws Humane Society! First, we have some tips to keep your pets safe on Halloween. Then, the shelter wants to help keep election day stress free for…

October is National Breast Cancer Awareness Month, and St. Francis-Emory Healthcare is making it easier than ever to get your yearly mammogram screening. Don’t wait to have your annual mammogram. The hospital's…

Opelika Main Street will be celebrating the Halloween season on October 29 with the first ever Downtown Opelika Drive Thru Trick or Treat event. This event, presented by Point Broadband, will allow…

Grab your spookiest costume and jump in line for Haunted Zumba on Saturday, Oct. 31, from 8-10:30 a.m. at the Frank Brown Recreation Center. Zumba instructors from around the Auburn-Opelika area will lead you…

October is Breast Cancer Awareness Month. Aside from skin cancer, breast cancer is the most common type of cancer among women. In…

The LaGrange Fire Department is hosting its annual Boot Drive virtually this year. It began October 1st and lasts through October 31st. Every year LaGrange firefighters host a boot campaign in person at…

Are you ready to search for pumpkins? Grab the family and join Active Auburn and the Downtown Merchants Association for a Downtown Spooky Scavenger Hunt. The hunt will begin Sunday, Oct. 25, through…

SPOOKTACULAR Trunk and Treat is coming up fast, Saturday, Oct 24th from 5 – 8 pm at the Civic Center will be here before we know it! Safe Kids Columbus…

RiverCenter for the Performing Arts Offers Virtual Concert Series Live From the West Side: Women of Broadway

RIVERCENTER announced today that it is one of a select group of nonprofit arts organizations participating in a three-part virtual concert series, Live from the West Side: Women of Broadway featuring two-time Tony…

The show must go on at the Jay and Susie Gogue Performing Arts Center! The Center will host three live performances by talented Alabama…

On October 19th, the nation’s top 2020 American Hero Dog will be revealed on a nationally broadcast special of the 2020 American Humane Hero Dog Awards® on Hallmark Channel. Now in their 10th…

The heartwarming stories of abandoned dogs and the grateful families who save them will be documented in the half-hour weekly syndicated reality TV show “To the Rescue.” Airing nationwide in over 200 markets,…

Paws Humane Society Holding Special Adoption Event & Gearing Up for First Event of the Year, Tails on the Trails

Lots happening over at Paws Humane Society! First, the inside of the shelter is back open after only having drive-thru adoptions due to the COVID-19 pandemic. The shelter is limiting the number of…

In the spirit of celebrating and recognizing diversity in the workplace, Goodwill will be holding the Working Together Career and Community Resource Fair on October 15 at the Goodwill Community Campus in…

America's Thrift store will be opening up their 21st store on  Thursday November 19th in Opelika at the old Gander Mountain next to Lowe’s! The Thrift Store has been around for 35 years…

Fire Prevention Week, Serve Up Fire Safety in the Kitchen

Cooking is the leading cause of home fires and home fire injuries. With COVID-19 continuing to keep people at home, the risk of cooking fires has increased. This year’s Fire Prevention Week theme,…

The National Faith & Blue Weekend (NFBW) is scheduled for October 9th-12th. The purpose of NFBW Weekend is to create safer, more inclusive communities by connecting law enforcement officers and the residents…

The Booster Club for Calvary Christian School Athletics will host a raffle drawing on October 30th during halftime at their varsity football game. There is a grand prize of $10,000 and several other prizes.…

It’s a Magical Garden Adventure featuring award-winning author, botanical historian Andrea Wulf. There will be both VIRTUAL and LIVE components since they cannot…

Beekeepers across the United States lost 43.7 percent of their managed honey bee colonies from April 2019 to April 2020, according to preliminary results…

September is Newborn Screening (NBS) Awareness Month. Newborn screening is a public health service done by all states to identify conditions not noticeable at the time of birth, but that may cause serious disability…

HallowFest at Six Flags Over Georgia!

Six Flags Over Georgia, the Thrill Capital of the South, leads the way for Halloween thrills and chills with a new event for the entire family—HALLOWFEST.  The event will feature Thrills by Day…

About 1 in 5 (19%) children in the United States has obesity. Certain groups of children are more affected than others. National Childhood Obesity…

Rejection Sucks. Here's How to Deal

I hope you had a nice weekend. Rejection sucks, but there are healthy ways to cope.   Celebrity trainer, life strategist, and author of The Way In, Andrea Marcellus, would love to share insight on…

Folks from all over came out to support our local community with the Local Mini Market! The show had local artists, a Farmer's Market, Boutiques, Antiques, Jewelry, Handcrafted items and live music!…

Time to Sign Up for Fall Classes at CVCC!

If you are looking to jump-start your educational career, especially during COVID-19, consider Chattahoochee Valley Community College! They have virtual classes and the right ones to get you on track to a four…

The 2020 Census collection wraps up on September 30 and it's so important we all get counted because that determines what federal money comes into our area. But, how is Columbus doing? We check…

As we are still in the midst of the Coronavirus pandemic, flu season is also creeping up. We have tips to keep you and your family safe as COVID-19 concerns continue.